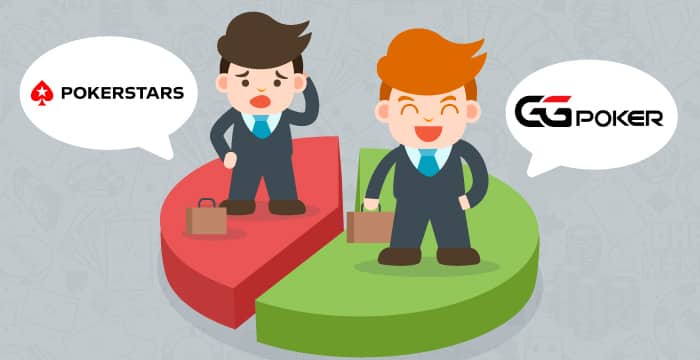 Over the last seven days, GGPoker was able to host more games than PokerStars and was thus able to overtake PokerStars’ moving average over seven days.

A reputed independent monitoring system for cash traffic known as GameIntel has claimed that over the last seven-day period, the moving average of cash players on PokerStars was 4981, while that for GGPoker was 5006. GGPoker global ambassador G.G. Nagreanu applauded the efforts of everyone at GGPoker for their historic week. But he claimed that GGPoker is also focused right now on maintaining their number 1 run.

The significance of GGPoker’s performance becomes clearer in the context of the long run that PokerStars has had at the top of the leaderboard. In 2006 after the introduction of the UIGEA, PokerStars shot to the top of the market. Since then, they have had an unbroken run at the top. But GGPoker overtaking PokerStars was not a huge surprise for industry analysts who have been studying their figures for a long time. GGPoker started in the Asian markets in 2017 and then gradually penetrated the European markets as well.

But GGPoker’s rise to the top was sped up only in 2020. In 2020 GGPoker entered into a deal with the World Series of Poker, which gave it a huge boost at a time when the entire industry was suffering from a crisis.

GGPoker is showing massive growth potential. Its year-on-year growth is presently at around 60%, which is impressive considering the pandemic economic situation. But GGPoker cannot rest on its laurels very soon. The cash game traffic shows only a section of the market and does not include tournaments and sit-and-go matches. Also, there have been previous instances of some operators suddenly rising to the top of the market but then being unable to sustain that spot for long.

GGPoker has a major advantage over PokerStars that may help it retain its position. GGPoker has a wider market and a larger global footprint than PokerStars. Both are primarily focused on the UK, but GGPoker also has markets in Estonia, Latvia, and a few more areas. GGPoker has recently withdrawn its operation from some dubious legal zones, but it still has a substantial market reach.

Nothing can ever be certain in the world of business, but most industry analysts believe that GGPoker will soon overtake PokerStars as the number one operator of online poker platforms.